Enryakuji Temple is a world heritage site with grounds that cover all of Mt. Hiei. This course gives you a full day to explore the 1200 year history of the temple and the resplendent nature in which it is couched. You will arrive on Mt. Hiei from Yase in Kyoto, and use the shuttle bus to travel around the mountainside. The return journey uses the Sakamoto Cable Railway, taking you down to Sakamoto in Otsu which has flourished as the gateway town to Enryakuji Temple.

*The Eizan Cable Car, Ropeway, and shuttle bus around the mountain do not operate during the winter season (early January - mid March) 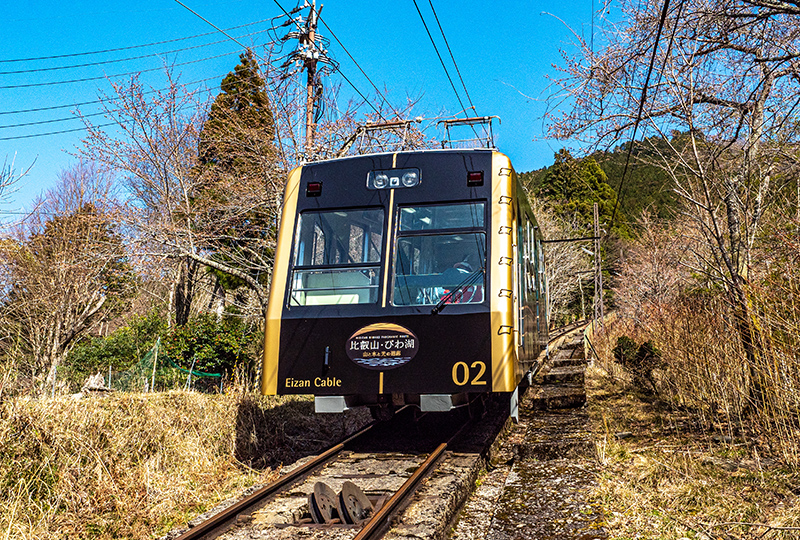 Head to the summit of Mt. Hiei using the Eizan Cable Car and Ropeway from Yase, Kyoto, a spot at the western base of Mt. Hiei which is famous for getting away from the summer heat. Boasting a height difference of 561 meters between stations, the Eizan Cable Car allows majestic scenery to be enjoyed in all seasons, including cherry blossoms, verdant greenery, and crimson leaves. After changing to the ropeway it is only three minutes to the summit. Enjoy a flight through the air from which you can look out over Kyoto city. (Does not operate between early January and mid-March).

Travel by Bus
Take the shuttle bus (fare required) from the Ropeway Mt. Hiei Summit Station and head to the Yokawa Area of Enryakuji Temple. (Time required: approximately 20 minutes, does not operate between early January and mid-March). 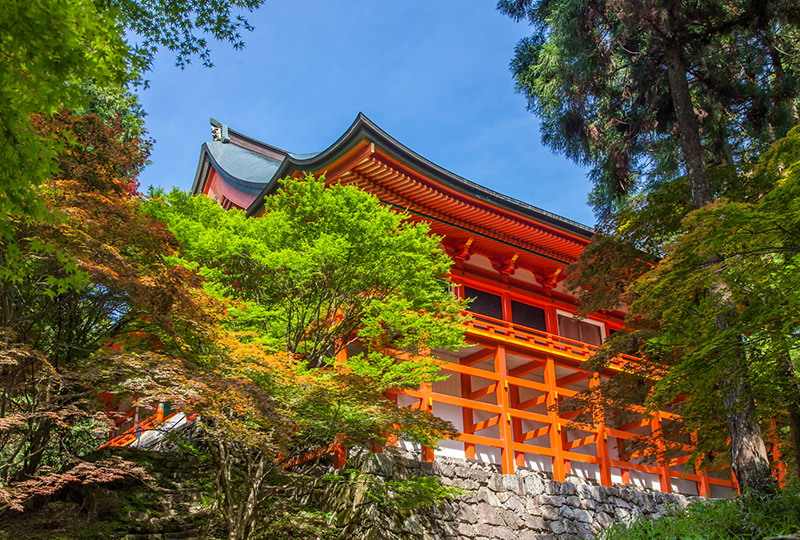 Yokawa is the most northern area from among the territory covered by Enryakuji Temple across all of Mt. Hiei. A place of ascetic training for many famous monks, a stern and sacred atmosphere remains here to this day. The Yokawa Chu-do with its vivid red lacquer is also characterized by its stage that sticks out like a terrace. 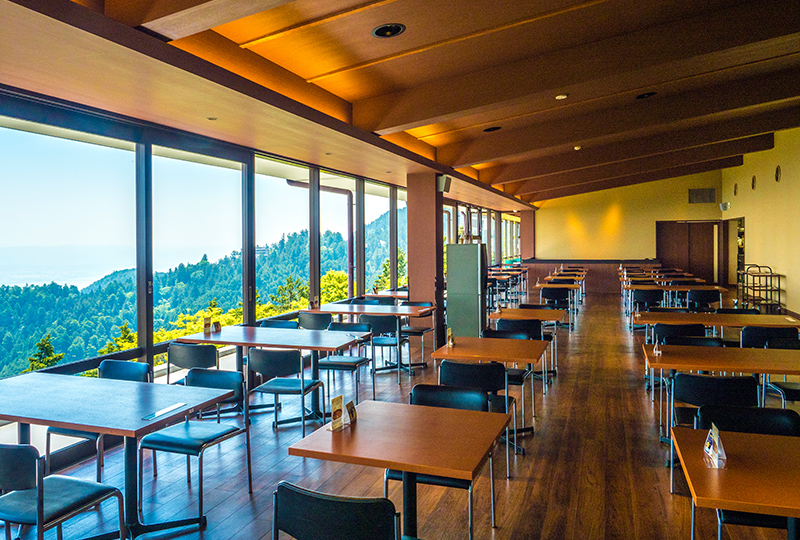 A restaurant that looks out over Lake Biwa, located between Yokawa and Sai-to. With a focus on locally produced ingredients, you can enjoy a lunch using famous Shiga Omi beef and free range chicken. 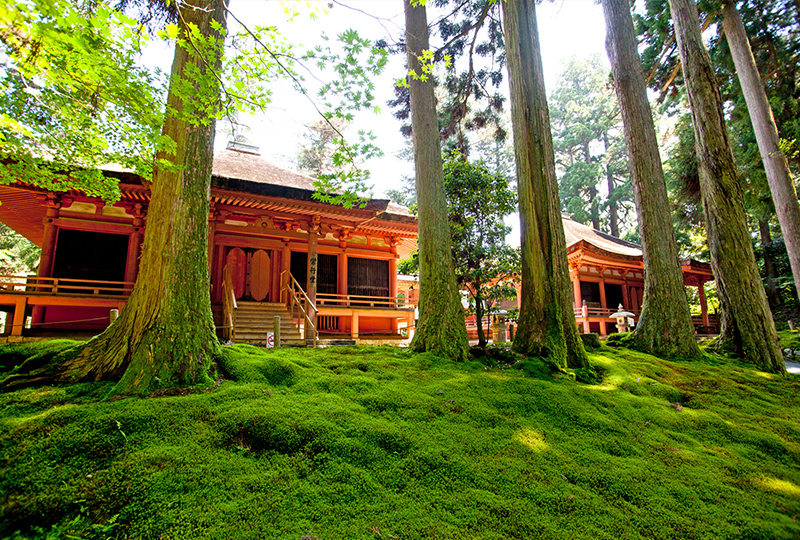 The Sai-to area is four kilometers south from Yokawa. Its main temple is the Shakado Hall, which as a 14th century building is one of the oldest in Enryakuji Temple. There is also the Ninaido where monks trained, and the Jodoin where Dengyo Daishi Saicho is buried.

Cable Railway
The return trip also uses the Sakamoto Cable Railway. The majesty of Lake Biwa spreads out below you. 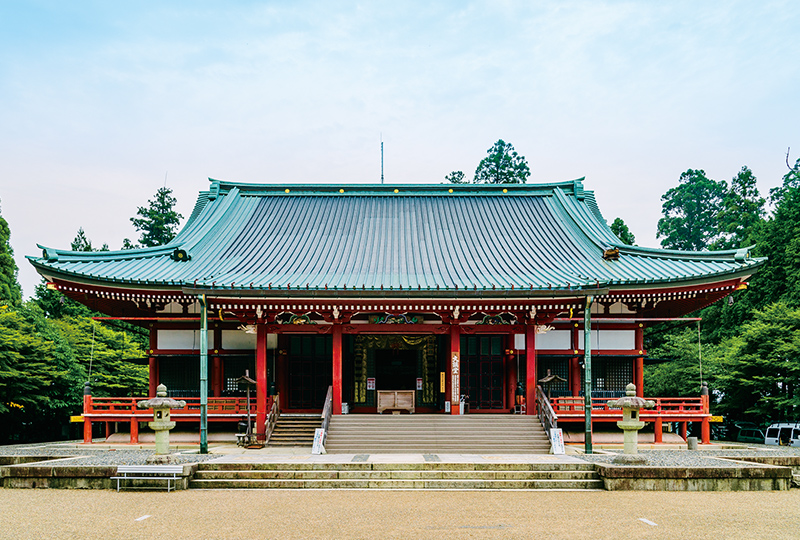 The To-do area is where Enryakuji Temple first began. The main temple, the Konpon Chu-do hall, is a designated national treasure dedicated to Yakushi, and is also known as the "eternal light of Buddhism" due to a candle that has burned inside for more than 1200 years. There are also other historical halls and temples to see here.

Cable Railway
The return trip also uses the Sakamoto Cable Railway. The majesty of Lake Biwa spreads out below you. 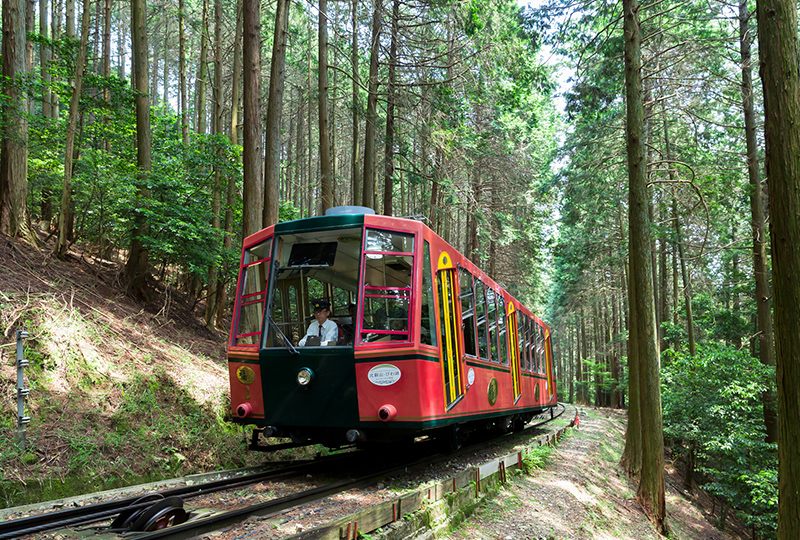 From the To-do area of Enryakuji Temple, take the Sakamoto Cable Railway and head to Sakamoto, the gateway town for Enryakuji Temple (requires 11 minutes). The dynamic scenery of Lake Biwa spreads away beneath you, an awe-inspiring sight. After arriving in Sakamoto, a stroll through the town with its impressive stone walls also comes highly recommended.

Situated on the boundary between Shiga and Kyoto prefectures,Hieizan forms a beautiful belt of five peaks.
It stretches about 16 kilometers north and south, and its highest peak is Obiei, which rises 848 meters above sea level.
Visitors are charmed by the twittering of wild birds in spring and soothed by its clean air, which is cooler than that in the plain below, in summer, when the foliage is a brilliant green.
Autumn turns the maple leaves scarlet over the whole mountain, and is followed by the tranquility of winter, which wraps it in pure white snow.
It therefore presents a different aspect that will surely delight the senses in any season.